It’s Group B Strep Awareness Month and I thought it would be a good opportunity to write about our experience of GBS in pregnancy and labour.

Firstly what is GBS?

Group B Strep is a bacterium which lives normally and naturally in and on humans without causing harm or symptoms. This is often described as ‘carrying’ or ‘being colonised’ with group B Strep.

About 1 in 4 pregnant women carry group B Strep bacteria without any symptoms. This is perfectly normal: carrying group B Strep isn’t a sign of poor hygiene and it is not a sexually transmitted disease.

Carrying group B Strep isn’t harmful to an adult, but it can affect newborn babies around labour and birth. It’s possible for group B Strep to affect the baby during pregnancy, but this is very rare.

I had previously heard of GBS only due to Alexa being premature and spending time in NICU, where we heard of a baby having had GBS.

I had my routine smear test in April which returned an Abnormal result and I was scheduled to have a Colposcopy for further investigations.

I was 5 weeks pregnant with Eden when I had the procedure and I honestly thought nothing more of it. They were able to see the area of pre cancerous cells but we’re happy to leave the treatment of those till 12 weeks after I’d delivered my baby which seemed reassuring.

Fast forward to my first antenatal Consultant appointment at 20 weeks and the Doctor while reading through my notes quite casually says oh I see you’re Group B Strep positive. Huh?! Rewind… I’m what?!

She hadn’t realised I wasn’t aware and showed me the results of the Colposcopy swab tests that had been added into my notes which included a test for GBS. She also had the midwife add some yellow alert stickers to my notes and give me an information leaflet.

Testing for GBS is not standard procedure during pregnancy in the UK currently. You can buy home testing kits. I’m not sure we would have known had it not been for my smear test, another reason not to miss those ladies!

Fast forward to my induction and labour (induced for other medical reasons). The midwives inserted a cannula into my wrist (they resorted to a baby cannula after 4 failed attempts, I have the worst veins!) and I was all good to go for my IV antibiotics once my waters broke or were broken for me. I had one 20 minute IV drip of antibiotics through the cannula once we were in the delivery suite, it was disconnected and that was the end of that! 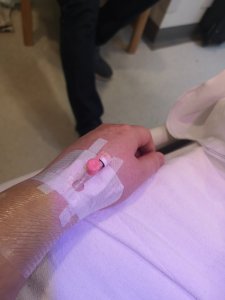 Thankfully we had no further complications, it is rare to have them but always a worry for any pregnant woman!

It is imperitive you go to the hospital when your waters break if you have GBS for intravenous antibiotics, make sure you make them aware when calling up that you carry Group B Strep so they can advise you correctly.

The GBS charity is a fantastic source of information and their website can be found here. They also can be found on Instagram @groupbstrepsupport and have lots of informative posts for Awareness Month.

Did you have GBS in pregnancy?

View all posts by Amy